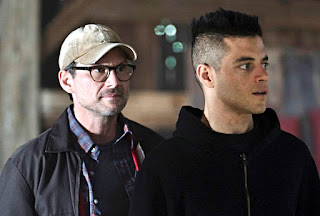 Mr. Robot on Amazon Prime is a very deep interesting TV show, not just for the insights into technology but more importantly on the changing nature of power in modern society. One character wants to control the money, some are trying control their own mortality by manipulating time, some just want to lead but are not up to the task, others see power as the ability to limit the powerful, and the main character simply wants the power to control himself. The key element is that all of those seeking power are seeking it for different motivations and thus define power and try to narrowly exercise power in terms of those motivations. What I think makes this show interesting is that the usual dramatic focus on Jung and Freud takes back seat to Alder and Nietzsche. The underlying emotional motivations are all over the place in the cast of characters making them unique and interesting, but the common thread uniting them is the obsession with remaking society based on each individual character’s damaged psyche. Given that our technology’s main effect is expanding our interactions it makes perfect sense that how much we can influence others and controlling how others perceive us become the top priority. The troubled psychosis of Eliot trying to control himself could be interpreted as symbolically paralleling our society’s struggles with learning to control the new powers that we have seized with computer technology. The main observation and warning from the show is that we have collectively been driven insane by this technology. Let’s hope that it is only temporary!
There is also a lesson here for those of us caught in the cross fire of power seekers. The show very directly and neatly connects how a leader’s action is driven by their value system. Thus it provides a road map to understand both the risks of differently motivated leaders and how a leader’s action can reveal their motivations and deeper personal struggles. We only need to watch the actions of our leaders to understand what motivates them and with that knowledge what they might try to do next. Unfortunately, a subset of the mentally ill seem to be the most desperate for control, so tend to be the ones to most aggressively use and abuse their power. Thus, when we spot such a disturbed leader we should act to remove them to minimize the damage that they will inevitably do.