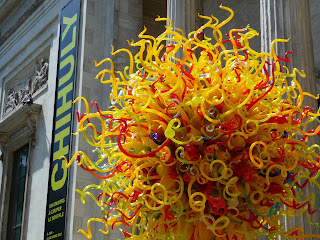 I finally took a day off on Friday and we decided to make a run north of the border for the day. Like most of our trips we picked one thing then went from there. The Dale Chihuly art glass exhibit is in Montreal and that became our goal. This was the first out of the country trip since returning and it ended up going pretty much like most of the other trips to foreign lands. The border crossing is always a bit anxious even when you know your legal and have the correct documents. There is always the little scripted game the border agents play with you asking you where you’re going where you're from while cleverly probing you for details in a disarming manner. Even when you’re perfectly honest there is always something stressful about knowing that if you answer the questions wrong they will park you somewhere for special attention. The first thing I noticed when we did cross the border was the odd traffic laws. The speed limit suddenly became 100 and from what I saw it must be illegal to signal before changing lanes in Quebec. Montreal is much bigger than I thought it would be and we did what we always do when visiting a city with non-english signs; we promptly got lost. I have said this before, if you can’t stand getting lost don’t travel to foreign countries. Anyway, we quickly re-oriented and found a place to park near the museum and immediately sought out a cafe to calm down.
We found a café where my first effort in French completely failed. The accent also had Karen completely stumped. We knew we would not get away with septante,  huitante and nonante, but who would have guessed that pain au chocolat is a chocolatine in Canadian French? When I did break down and describe it english, it was good enough that I could have been in Europe! I had forgotten how intellectually stimulating being immersed in signs and people using a foreign language. There is something about constantly working at understanding and translating that keeps your brain more awake.


The exhibit was magnificent and we took A LOT of pictures (see Karen’s set at tinyurl.com/ora2me5 , my 3D’s, are and will be on my Tumblr site at http://jparcoeur.tumblr.com/). The museum is free but the special exhibit costs $20. It was totally worth it. We ended standing in line for about 20 minutes. After the exhibit we went to lunch and then went back to to see the regular exhibits. For lunch we wandered down the cheap restaurant street (Bishop) completely by accident. We decided on a funky looking Mexican place that turned out to be vegetarian (Burritoville) after walkng past a bunch very greasy looking options.

We had the best sweet potato tacos I have ever had! It was very good, inexpensive and I would highly recommend it. After lunch we walked around the block to get back to the museum and found the expensive Euro-outdoor style restaurants like you see in Switzerland and France. Maybe next time we will try one of those if we are feeling homesick for Europe. We went backing in and saw the free exhibits which were also interesting and good. The drive back went better without getting lost. The view going over the Champlain Bridge is amazing and we saw even more amazing driving again. We were a bit worried about the wait going back into the US but we only sat around for about twenty minutes. Overall it was a great day and we are planning to hit the botanical garden next time around.
Email Post
Labels: Canada Chihuly Montreal