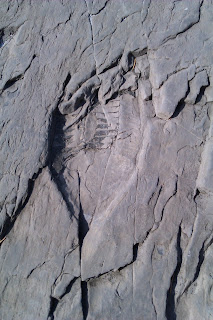 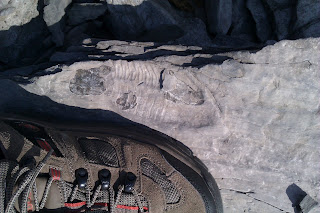 It looks like I moved from the Jurassic Coast to the Silurian Shore. Here are pictures of my first trilobite fossil finds. Growing up in Oregon, I am used to tripping over fossils all over the place with the exception of the big basaltic lava flows around the Columbia River Gorge. The rocks around Lake Champlain are very different. They are some of the oldest in North America with some dating from the mid Cambrian and most not more recent than around 450 million years old. This means there are very few fossils compared to Oregon, even in what is obviously ocean floor layered sediment. To my eyes the layers of grey rocks look like they are missing something. The Cambrian must have been a very lonely time or composed of some very squishy critters that did not fossilize. Last weekend however we were checking out Point Au Roche and I came across these two impressions along the lake that can only be trilobites. I had never found trilobite fossils before so I am probably more excited than I should be. Theese are not spectacular specimens but they are my first (also added a Scarlet Tanager to my life list on the trail back). Trilobites were fascinating animals that went from being very common and diverse sea creatures to completely extinct. They had some of the fundamental segmentation patterns associated with modern arthropods (insects, crustaceans, spiders, millipedes etc) and the first compound eyes. If The Doctor ever offered me a ride in his blue box I think a trilobite collecting trip would be close to the top of my list of things to do.
Email Post
Labels: Evolution fossils science Trilobite