Where are the Dorian Gray’s?

I recently watched a movie adaptation of The Picture of Dorian Gray and realized that there are no examples of human mutants who do not age in the manner of Dorian Gray. There are examples of old people doing well into their 100’s and rare young children with the bodies of 70 year olds who do the opposite, but I am unaware of any records of any 75 year olds who could pass for 20. Why is that?

First, for those who have not read The Picture of Dorian Gray by Oscar Wilde, the important point here is that the main character does not age while retaining the body of 20 year old until his final demise in his 70's. Evolution seems to have no trouble pulling off this trick in some animals like sea urchins and seed harvester ants. This is called negligible senescence. The lack of specific cases in humans suggests that there are no single mutations or even pathways that are master controls of aging. If such a simple mechanism existed, then by chance someone should have been born with a modified version of this pathway and would have never aged.  I cannot imagine that such a person could have passed unnoticed in history. 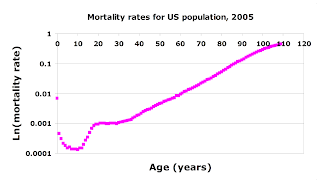 People do not technically begin to age until around thirty when our age specific mortality rate begins to double about every eight and a half years. In the figure, the flat line between twenty and thirty means that one’s probability of dying is constant over time. Around thirty, something happens and we begin to age in the sense that our probability of dying increases exponentially with time (the straight increasing part of the curve). Dorian Gray, and animals with negligible senescence, simply continue with the constant flat level trajectory indefinitely. This transition around thirty is the area that evolution must act on to evolve longer life spans. All of the genes that worsen or improve health after this point are just random noise because they work after most offspring have been born and therefore do not affect fitness. The key to unlocking aging then would seem to be asking what is the difference between a 25 year old and 35 year old as opposed to worrying about why some people live to 100 and others don’t. Given the complete lack of any humans mutating to a permanent flat mortality rate all at once, and that there are many examples of evolution of longer life span, there must be human variants out there who transition a little later into their 30’s before crashing into the next problem causing exponential mortality increase. Perhaps by identifying people who seem to prolong youth slightly into their 30’s, we can pick off the first step by understanding their physiological trick, then look for the next set of people who seem to look young for their age and so on.  .  .  .
Email Post
Labels: aging Dorian Gray Evolution mortality curve science