There are rumblings that Britain may be very soon debating the relative merits of changing their university degree classification system to a more internationally recognized version of an American style GPA. This will be a huge challenge. Moving between the marking/grading systems (Brits say marks, Americans grades) was one of the most difficult cultural problems that I encountered when I started teaching in Great Britain There are two areas where the accepted way of doing things is reversed;  1) the reversal of categorical classification and numerical scoring for individual classes and final degree, and 2)  the calculation, or non-calculation of exit velocity (weighting end of program grades more heavily). In addition, there is no clear linear way to map the A to F 0-4.00 GPA system to Britain’s 1st 2.1, 2. 3rd  0-100 system.

The most obvious difference between the US GPA system and the British degree classification is that a British student gets a classification on their final diploma, whereas the US system provides a GPA as a general overall mark. The greatest weakness of the British system is an inability to distinguish within classifications. In Russell Group universities about 18% graduate with a first and 57% graduate with 2.1. This means that almost 57% of British graduates from the top 20 universities are lumped together with no way to distinguish them without picking through their transcripts. I should point out that degree classification is critical for a Brtish student’s future because most employers use these as a rule of thumb:  first means outstanding, hire them before the other guy does, 2.1 means good enough to interview, 2.2 means only interview if you have to (updated citation from the Guardian), and third means you’ll be lucky if they show up for work most of the time. Hence there is a great deal of pressure to get these correct because it really does matter.  In the US, an employer would ask for a GPA or perhaps class rank. These two US measures provide a much finer distinction between students and are based on results collected over more years (4 year degree in the US versus using only 2 years out of a 3 year degree in Britain). They are therefore a generally more accurate measure of performance over the entire student’s degree program.


Another important difference is that the British system attempts to classify the student as they are at graduation, whereas the US system gives an average measure of student performance over their entire time at university. In Britain, the final 0-100 scores are weighted to correct for exit velocity (weighting the last years more than the first years of the degree) before averaging to find the degree classification. One common weighting scheme is not to count to the first year, include second year marks and then count third year marks twice (weighting 0:1:2) to determine a percentage score which is converted into the degree classification.  Borderline cases are then dealt with in some standard or even subjective manner. Thus the British degree classification indicates the students’ level of performance at the time of graduation.  In contrast, a US GPA measures the overall performance throughout the students’ time in university. In the British system, the responsibility of correcting for exit velocity is the university’s call whereas in the US it is the employers’ job to look at the transcript and correct how they see fit for trends in grades. Thus, a US GPA is a nothing more than a raw and wholly unuseful number from the point of view of the current British system. On the other hand, this makes perfect sense for American universities with a broader curriculum. Here the trend for classes in one's major might, or might not, be the one an employer is most interested in. Who is responsible for correcting for exit velocity may be the single greatest obstacle to defining a universal worldwide consistent GPA or degree classification system. Either British academics will have to relinquish correcting for exit velocity (good luck with that) or the US will have to agree to similar weighting schemes. Not only would one side’s academics and students have to adjust to one way or the other, but the employers would also have to be re-educated on this issue. 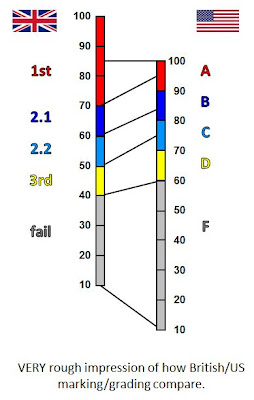 Finally, the most confusing practical issue is the non-linear way percentage scores in Britain map onto percentage scores in the US system.  In the British system 70 and above is considered first class (a solid to high A in the US system). Furthermore, anything above 90 is almost unheard of and 100 for an essay exam answer simply never happens. The next level down is a 2.1 classification (B+ to A-in the US) that is between 60 and 70 in Britain. This is considered a well done job. The next level is a 2.2 from 50 to 60 which is a decent enough job (mid C to B) and a third from 40 to 50 (D- to C). Below 40 is a fail.

Even trying to use a simple percentage or 0-100 scale instead of the 0-4pt GPA scale would not provide any more progress towards an international metric without great cultural change and re-education of academics and employers. The best one might hope to achieve is to provide a 0 - 100 mark for British degrees in British units to distinguish within the large groups of 1st and 2.1 students. Class rank might seem to work but it is clear that there are differences among years and trends in performance over years that rankings would not reflect.

It will be an interesting year if some British universities do follow through to begin work on such a move.
Email Post
Labels: Britain education GPA grades marks university US